There is a lot of discussion during the political season about what “evangelicals” will do as a voting block.   How do you know if you are an evangelical?  The reality is that the term ‘evangelical’ is a very difficult term to define.  It has historical, theological, political and social meanings.  My study of Pentecostalism has required me to try to understand the meaning behind the word.   I thought I share a somewhat simplistic guide to understanding some of the history of the term.

A couple hundred years later, Protestantism had enjoyed periods of rise and decline.  In the mid-1700’s  a wave of revival came to Britain and America.  Revivalists such as

Charles Finney and John Wesley brought spirituality back to the declining church that had become too doctrinal and formal within protestant denominations.  This led to a revival  that once again emphasized conversion experiences and emphasis on biblical forms of Christianity.   During this time Baptists, Methodists, Presbyterians, Anglicans and Congregationalists were all emphasizing personal salvation, holiness, Spirit empowerment and the expectation of the return of Jesus.  They also emphasized social action through the gospel. Many evangelical missions, orphanages, hospitals, inner city ministries, abolitionist, women’s voting rights and welfare programs were begun during this time.  Historian David Bebbinton characterized evangelicals during this period as:

By the end of the 19th century, nearly all the major denominations had an evangelical emphasis that included the sanctifying and empowering work of the Spirit, holiness and divine healing.  In the late 1800’s, Evangelical leaders like D. L. Moody, A. J. Gordon (Baptist), A. T. Pierson (Presbyterian), and A. B. Simpson (Presbyterian turned founder of Christian and Missionary Alliance) were all calling the Protestant church to embrace a ‘higher life’  evangelical spirituality.   Many of these leaders were writing books about being baptized in the Holy Spirit, Healing and Sanctification. They worked together across denominational lines, shared their various beliefs at Bible conferences, and engaged in social issues issues. Yet, they were still differentiating themselves from other Christians that they thought were less than committed to the Bible.

Now at this point, you would probably be comfortable with the label “evangelical.”  But wait, it gets more complicated moving forward.

At the start of the 20th Century, a great revival broke out among Wesleyan Holiness people that began to emphasis the Spirit, healing, miracles and speaking in tongues.  The Pentecostal movement was essentially an outgrowth of this Evangelical movement.  Though the theology differed between more Wesleyan holiness Pentecostals and more Reformed/Baptist Pentecostals, they all saw themselves in this stream of set apart evangelical believers who were called to bring people out of the formal churches and into a living faith with Jesus. Once this new Pentecostal movement began, many Evangelicals were forced to decide if they were going to accept these new tongue talking revivalists.  Many did.  But by 1910, some Evangelicals were already beginning to reject Pentecostalism’s claim that tongues were the evidence of the baptism in the Spirit.   Although Pentecostals thought of themselves as Evangelical, Evangelicals were not so favorable toward Pentecostals.  Rhetoric against Pentecostals grew in popularity as evangelicalism became less revivalistic and more cerebral.

Concurrent to the beginning of Pentecostal movement was the rise of Modernism within academia.  Evangelicals reacted to the Modernist method of denying of miracles of Jesus, the salvation experience and their adoption of evolution rather than believing the book of Genesis. To put in today’s language, modernists were what people today label as ‘liberals.’    In 1910, a group of evangelical scholars wanted to defend biblical christianity against the rise of modernism and liberalism by publishing a series of books called The Fundamentals that they sent free of charge to every church and minister they could reach.  This group of conservative evangelicals became known as “Fundamentalists” in the 1920’s.  However, the more this group emphasized correct doctrine, the more they pushed others away, including the ‘fanatical’ Pentecostals.  Whereas Evangelicalism had diverse opinions and tried to maintain unity, Fundamentalism became an ultra theologically conservative (primary Calvinistic), non-inclusive movement that retreated to isolationism from the growing secularism and modernism influencing the culture.  In the mid-1920’s, Fundmentalists officially rejected Pentecostals.  They were no longer welcome in the evangelical/fundamentalist family.  (For more on this check out this article). Whereas 19th century evangelicalism engaged culture and promoted the work of the Spirit, early 20th Century evangelicalism rejected the Spirit and isolated from the culture.  The list of heretical Christian groups began to grow and they rejected anyone who didn’t agree with them and labeled them with the liberal-modernist label.

In the 1930’s and 1940’s a resurgence of American identification with Christianity led a movement of many denominations with varying degrees of ties to fundamentalist sympathies began to join together to be more unifying and influential in American culture. The result was the National Association of Evangelicals.  Their goal was to agree on what was essential to Christian doctrine and principles. They also sought to recover America’s Christian identity. They affirmed basic Protestant doctrine but unlike Fundamentalism they allowed room for outliers such as the Pentecostals.  In fact, Pentecostals became a large part of the NAE.   They tried to distance themselves from the “fundamentalist” label because of the negative and combative connotations of the name.   Evangelical once again became a term that meant protestant Christian.  However, many of the mainline (more liberal) denominations did not join. So the divide between conservative and liberal remained. 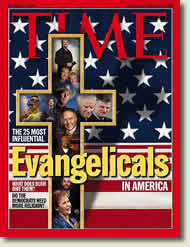 In the 1980’s there was a resurgence of political activism among Evangelicals.  Once again, they were ready to engage in a cultural battle with “liberals” and attempt to bring America back to the Bible.  The 1980’s saw the rise of the Moral Majority, Right to Life,  Conservative Christian Colleges, mega churches and influential Christian leaders like Pat Roberson, Jerry Fallwell, James Dobson who were conservative theologically and emphasized political activism above social activism.  During this decade, so called evangelicals (born again christians) were mobilized to issue oriented voting which eventually culminated in the election of Ronald Reagan.  With Reagan, the Evangelical vote became the central block of the Republican party.   Prior to 1980, evangelicals could be found within both Republican and Democrat parties.   However, now Evangelical came to mean “politically conservative Christian voter”.  Candidates for office at local, state and national level had to assure the public they were ‘born again.’  That continues today as Republican candidate Donald Trump courts the Evangelical vote by assembling his team of evangelical leaders and the recent news that Trump has been “born again.”  No Republican candidate today can win without the so called ‘evangelical’ vote.

As you can see, today the label has become less theological and more political in orientation. It still means ‘born again’ protestant believer, but it means more than that.  Many theological traditions that made up 19th Century Evangelicalism are no longer welcome in that category because of political positions, even though they may still have evangelical theological positions.  Today that term has been reduced to simply a political categorization.  This is way many (primarily younger Christians) have rejected this label and are critical of evangelicalism.

As you can see, the name ‘evangelical’ has gone through many different shades of meaning.  Perhaps you might find yourself more or less comfortable with the label.  Of course the history is much more complex than I am able to describe here. Even so, I hope this description at least helps you understand the term better so you can decide for your self if you are in fact an ‘evangelical.’