From the beginning, the Pentecostal movement had a careful relationship with theology and the pursuit of education. Even today, many of my educated AG pastor friends are often frustrated with the way in which people within our fellowship are suspicious of education.  Roger Olsen speaks of the these attitudes.  He says, ‘Endemic to Pentecostalism is a profoundly anti-intellectual ethos. It is manifested in a deep suspicion of scholars and educators and especially biblical scholars and theologians.’[1] Some early Pentecostals rejected the need for education because they believed the Holy Spirit and the power of God was a greater validation of ministry than human approval. Elizabeth Sisson, a veteran missionary and evangelist who joined the AG in 1917, rejected the notion that she needed any credentials, education, or degrees to validate her ministry. She remarked,

You might hold all the offices of the church, and append to your name all the letters of the alphabet bestowed by all the universities of Europe and America, but these things of the power and learning and intellect of man will not release the demon oppressed, will not heal the sick, etc. But praise God, through the simple believer, under the power of the Holy Ghost, these things are wrought.[3]

Sisson’s application for credentials with the AG reveal this sentiment. When asked ‘have you been ordained and by whom?’ on the application, Sisson responds, ‘By the Lord.’

The problem with education for many Pentecostals was not the pursuit of knowledge; it was education at the expense of simple faith in Jesus and the Scriptures. The main concern was the way in which seminaries were indoctrinating its clergy in Higher Criticism. Denominational seminaries were believed to be guilty anti-supernatural bias the sought to ‘tear the blessed Book of Life to pieces’.[8]   A.G. Jeffries, a British AG evangelist, describes the situation.

For fifty years the American people have been cursed with head, and starved for heart preaching. Many churches have demanded of their ministers a classical education before ordination, and have made little or no demands of them along spiritual lines. It has been all head and no heart, and this very thing has brought on a spiritual dearth that has been and is appalling indeed.[4]

The return to heart Christianity over head Christianity was part of the lure of the Pentecostal faith.  Because of this, many late 19th Century evangelicals turned to the Bible School model where they emphasized spiritual formation as well as knowledge. Many early Bible schools boasted of having ‘No book but the Bible’ and ‘No teacher but the Holy Spirit.’

The reaction to modernism and education did not necessarily mean that Pentecostals were anti-education.  This is certainly the case when one looks at  Assemblies of God leaders.  Some of the most prominent early leaders of the AG were themselves educated in colleges and seminaries. These were not lay-theologians who were articulating a populist Pentecostal theology. [5] E. N. Bell, a well-educated Southern Baptist Pastor, held a bachelors degree from Stetson University and a seminary degree from Theological Seminary in Louisville  as well as spent 3 years at University of Chicago. J.R. Flower was not trained in theology but spent two years preparing for law career in Indianapolis. S. A. Jamieson was a ‘scholarly’ Presbyterian minister who spent nine years in Wabash College and Lane Theological Seminary.[6] Arch P. Collins did his training at Baylor University. T. K. Leonard spent two years at Findlay College, a Church of God institution. P. C. Nelson was trained at Denison University and later Rochester Theological Seminary where he trained under Augustus H. Strong.[7] 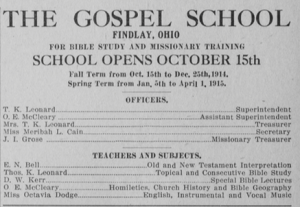 The first AG Bible school where subjects were taught including OT and NT interpretation, Church History, and Homiletics.

The relatively high level of education in many of the early AG leaders was vital to the preservation of the fellowship through several theological debates that took place in the first decade. These leaders had to formulate a doctrinal statement, defend the orthodox views of the Trinity, and articulate their Pentecostal distinctive.  Their ability to articulate sound theological views was greatly helped by the education they brought with them into the fellowship.

While some  still have the attitude that education is detrimental to Pentecostal Spirituality, there is a legacy in the AG of educated ministers and a commitment to higher education. In a future post I will share a bit about AG education and the origin of AG Bible schools. Hopefully this post is a reminder that attitudes about Pentecostals should always be understood in context.  While it is true that anti-education sentiment was part of early Pentecostalism, it certainly was not the whole story.  The AG benefitted greatly from the education level of many of its founders and early leaders.  It is part of our history. It is a part that I am grateful for and hope will continue to be important for this generation.

[2] Sisson’s application for credentials reveal this sentiment. When asked ‘have you been ordained and by whom?’ on the application, Sisson responds, ‘By the Lord.’