You are part of my Isgrigg family that I didn’t know existed until just recently. Nearly two decades ago, my father began a journey of writing the story of our Isgrigg ancestors who came to America in 1740.  The story he discovered was that at the age of 16, our ancestor, William Isgrig, was arrested in London England for stealing from a silversmith he worked for and was sentenced to seven years of indentured servitude in the Colonies. He came to Baltimore, Maryland, aboard a convict slave ship and was sold at a slave auction.  I can’t know what that would have been like to be a young man being a sold as a piece of property for the profit of a land owner in a land far away. I have no idea how he was treated, but it couldn’t have been easy. But his story has a happy ending. He was set free after his seven year sentence and by 1747 he was a free man. Over the next ten years he worked odd jobs until May 17th, 1771, he leased a large 135 acre estate. His story is a remarkable one.  It is a story I have shared freely with people. I was proud of that history, at least until I re-read the story and realized what happened next.

According to our history, in 1771 William purchased several “white convict slaves” and two African slaves to help him work his land.  That is where you enter my story and my family. My ancestor, William Isgrig, bought you as slaves, perhaps for as little as $300 each. The shame of admitting these words is too much to bear. My great (x8) grandfather was a slave owner.  I had read that story before, but for some reason I didn’t remember this sad reality. The man who came to America as a slave became a slave owner. What is remarkable is that my father even uncovered your names: an African male named Samson and a African female named Luck.

Dear Samson and Luck, I cannot possibly express how sorry I am for this. My ancestor, 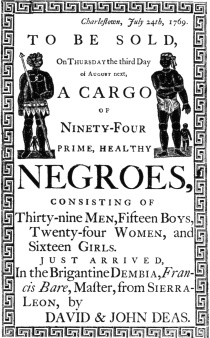 who knew himself the torture of being sold as property, turned around and purchased human beings—you Samson and Luck—to be his property for his own financial benefit. Shame on us.  You worked our land. You cooked our meals. You took care of our livestock. You had no choice. You belonged to us. On the backs of both of you, my ancestor grew in wealth and established himself as a respected man and Revolutionary colonist. He even took up arms to fight for freedom for his new country, but cared little for the freedom of the enslaved human beings in his own household.

What is worse is his son, John Isgrig, carried on the tradition and owned his own slaves to work his own 200 acre farm in 1790 in Pennsylvania. John eventually moved to Clinton County, Indiana, our home county which my father’s family has called home for generations. Our story from there is the American dream, from convict to successful middle class American family. But it was built on a foundation of exploitation. Shame on us.

Like anyone who is forced to confront this ugly reality, I wanted to qualify it by hoping my ancestors were good to you. But there is no way to know this. I have to face the reality that they could have been cruel just as easily as “good slave owners.” Even so, I

won’t justify these actions by saying “it was just the way it was” or by pretending that a nice slave owner makes it ok.  It is not OK. My family line sinned against God and against the image of God in you as valuable human beings. My family gained an advantage in this new world, this land of freedom, by exploiting you for our own personal gain. They were Christians, Methodists by profession, but did not see the indignity of what they did. My ancestors prospered, in return you and your descendants continued to be enslaved.

I have no idea what happened to you. But I want you to know I am sorry. I am asking you to please forgive me, forgive my family for owning you as property. I repent before God for what my family did. I cannot undo what the Isgrigg’s did to you. But I know your name now, Samson and Luck. You were precious human beings, created by God, created to be free. But evil men brought you to the Colonies and sold you to a white man named Isgrig, who as a slave himself should have known better, but chose prosperity over humanity, to my ever living shame.  I know that now. The world now knows your name. And we will not forget it.

One thought on “An Open Letter to Samson and Luck, The African Slaves Owned by My Isgrigg Ancestors”